Ex NUM President Arthur Scargill has called for a Hillsborough like inquest into the events at the Orgreave coking plant in 1984. This follows an article published by the Yorkshire Post, which states the same senior South Yorkshire Police officers were involved both in the aftermath of Orgreave and the tragic Hillsborough disaster 5 years later. The article published by the Yorkshire Post on 3rd May 2016 states the paper had an exclusive look at a redacted report by the police watchdog, the Independent Police Complaints Commission (IPCC).

This article comes as another blow to the crisis hit police force which has been making headlines following the outcome of the Hillsborough inquest last month. Mr Scargill is alleging that a similar cover up went on at Orgreave as that which has been proven to have occurred at Hillsborough. This is on the back of allegations that witness statements had been altered to suggest that violent force was not used against picketing miners.

The Battle of Orgreave, as it has come to be known, saw thousands of picketing miners clash with South Yorkshire Police outside the Orgreave Coking Plant in 1984. The miners wanted to stop lorry loads of coke which were headed to the steel works from leaving the coke plant. 95 miners were arrested and 50 people were injured during the clash which was the bloodiest event of the whole 1984-1985 miners strike. 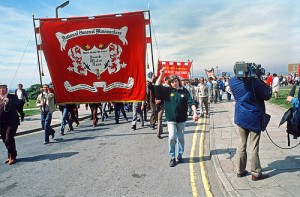 Miners picketing during the 1984-85 Miners Strike

Home Secretary Theresa May is facing growing pressure to open an inquest into what happened at Orgreave in 1984, having met with members of the Orgreave Truth and Justice Campaign in July 2015. They submitted, at her request, evidence in December 2015 for a public enquiry. There has been no reply as yet, with suggestions that the evidence is still being examined.  Shadow Home Secretary, Andy Burnham also raised the issue of the redacted IPCC’s Orgreave report in the House of Commons recently following the Hillsborough inquests findings.

Could this be the beginning of the journey for truth for the miners and their families and, more insight into the less than honest actions of senior officers at South Yorkshire Police?

Jordans has a dedicated team who are working for miners and investigating their original Vibration White Finger claims to see if they received the correct amount of money. If you think you didn’t get enough or want us to check if you’re entitled to more then call our team FREE on 03303 001103.