The final was hosted by the Hepworth Gallery in Wakefield and commencing at 16:45 the motions debated were: “Autonomous vehicles will make driving safer”, “There should be limits to free speech on social media” and “We should accept the risks inherent in contact sport”.

The competition is open to sixth formers from schools and colleges in and around the Wakefield area and participating in the final this year were; Outwood Grange Academy, Wakefield College, St John Fisher Catholic Voluntary Academy and Silcoates School. 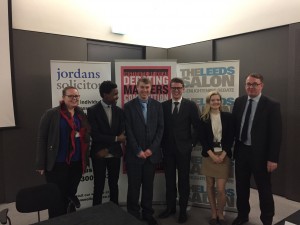 Having won the Jordans Debating Competition Final, Outwood Grange Academy will now compete against another five Yorkshire schools to win a place in the Debating Matters National Final to be held at the Museum of London in July 2017.

We would like to thank the Leeds Salon for working with us for the Debating Competitions and judging the competitions in the Debating Matters format. We would also like to thank Jordans Solicitors partner Peter Kirrane for judging the competition, as well as our guest judges; Elizabeth Clarke of Space Inspired, Dan Clayton and David Oxley of the Leeds Salon, Meghan Goodeve of the Hepworth Gallery, Adam Rawcliffe of the Institute of Ideas and the Rt Revd Dr Tom Butler.  We would also thank Paul Thomas of the Leeds Salon for chairing the finals.

Jordans Solicitors are proud to organise the yearly debates, giving young people the confidence to speak out and think outside the box;  we would like to thank the members of the public who attended, teachers and especially all the pupils who participated; we look forward to seeing you all again next year!

For more information about the competition, please see the Leeds Salon website here and the Debating Matters website here.

St John Fisher Catholic Voluntary Academy have also published their comments on their website which can be found here.

Jordans Solicitors take on the Wakefield Way for CAP Care