For many years coal was the fuel that powered this country. It warmed our homes; it fuelled our trains and powered the power stations which generated our electricity. But not anymore, on Friday 21st April, the National Grid announced it had gone a whole day without using coal to produce electricity. This is thought to be the first time that has happened in Britain since the industrial revolution. 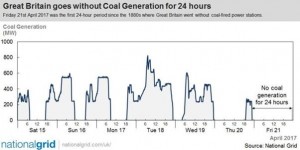 The National Grid described Friday as “a watershed moment in how our energy system is changing, the UK benefits from highly diverse and flexible sources of electricity. Our energy mix continues to change and National Grid adapts system operation to embrace these changes.”

Coal use has declined since the 1990’s with Britain’s last deep coal mine, Kellingley Colliery in Yorkshire, closing in December 2015. Most coal powered power stations have closed or been converted to use biomass such as wooden pellets. The government plans to phase out Britain’s last plants by 2025 in order to cut carbon emissions. In 2016 coal accounted for 9% of electricity generation, this was down from 23% in 2015.

Greenpeace said of the event “A decade ago, a day without coal would have been unimaginable, and in 10 years’ time our energy system will have radically transformed again.” But there have been claims that using wood pellets is actually speeding up not slowing climate change.

Wood is not carbon neutral and emissions from pellets are higher than coal was the findings from a recent report by Chatham House. The energy industry slammed the report stating wood energy cuts carbon significantly.

On Friday 21st April half of the energy produced was gas powered with the other half being a mix of wind, biomass or imported energy. The use of solar panels and turbines has increased greatly with both wind and solar farms now dotting the landscape. In fact as a twist of irony the old pit tip in the mining village of Askern, South Yorkshire, is now a solar farm. The pit may have gone and isn’t producing coal to fuel the country, but the remaining land is using the sun to produce power for the country instead.

Whatever the arguments, this is a landmark moment and a sign that the once mighty fuel has been consigned to history, like the men who used to extract it. 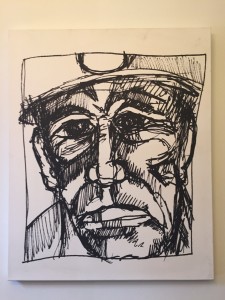