A new report published recently claims many workers in ex-coal mining towns are more at risk of losing their jobs to robots. By 2030 nine areas, which include the ex-coal mining communities of Doncaster, Mansfield, Stoke, Sunderland and Wakefield, could lose a quarter of jobs to AI and automation according to a report by the think tank Centre for Cities.

According to the report, these towns which have a “lower share of high-skilled jobs” risk losing just under a third of their current workforce by 2030.  Retail and warehousing sectors are predicted to see changes in Robotics and AI. In Mansfield warehousing accounts to one in every 10 roles, whereas in Sunderland almost one in 5 roles is in retail. 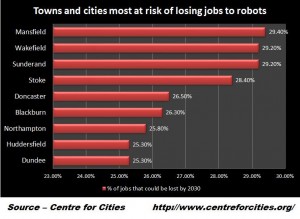 In the ex-coal mining areas there are now industrial parks where the pits used to be. These parks are home to huge warehousing complexes, call centres and out of town retail parks.  All these sectors are those that the Centre for Cities are saying could change.

Mansfield is already adapting to automation and Russel Jones of the Mansfield 2020 business group claims the town will not suffer the loses predicted by this recent report.

“Jobs being automated has been happening in Mansfield for the past 20 years,” he said.

“That is why we’ve been building a local economy based on high quality and high-skilled jobs. Travel between junction 27 and 29 on the M1 and you’ll see a vibrant mix of new housing and commercial estates.

“Our future will be somewhat different to the picture portrayed in this report.”

“Automation and globalisation will bring huge opportunities, but there is also a real risk that many people and places will lose out,” he said.

“We need to reform the education system to give young people the skills to thrive in the future, and we also need greater investment in lifelong learning to help adults adapt to the changing labour market.”

Prime Minister Theresa May has said the government is committed to helping “people secure the jobs of tomorrow”, with plans already in place to create a new national retraining scheme to help workers develop new skills.

The report cites self service tills in supermarkets and messenger drones as examples of where automation is already having an impact. We only have to look recently to Seattle in the United States where Amazon opened their first store without any checkouts to see the possible future of retail.

Could this be another example of the coal mining heartlands of the north bearing the brunt of an industrial shakeup? The report predicts Oxford, an area of more high skilled jobs, may only loose 15% of its workforce.

The physical impact of a career at the coalface still takes its toll on many miners with conditions like Vibration White Finger prevalent amongst many. Jordans Solicitors has a department working with ex coal miners looking into their Vibration White Finger claims as it has come to light that many miners missed out on £1000’s. If you’re an ex miner and think you may have a claim, contact a member of our VWF team free on 03303 001103.